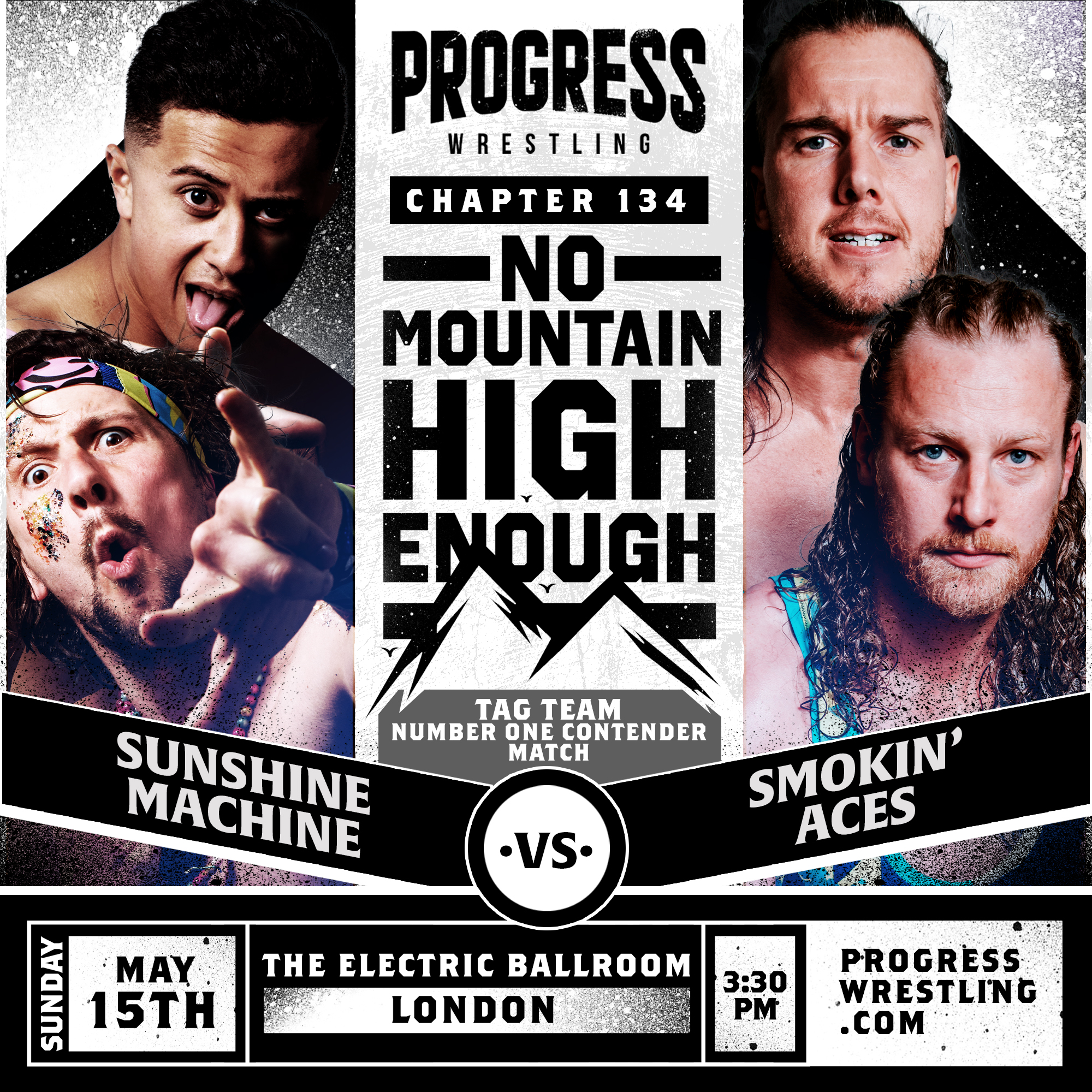 Two of PROGRESS Wrestling’s premier tag teams will meet at Chapter 134: No Mountain High Enough on Sunday, 15th May.

Sunshine Machine (TK Cooper and Chuck Mambo) will take on Smokin’ Aces (Charlie Sterling and Nick Riley) in PROGRESS Wrestling’s home, the Electric Ballroom in Camden, North London, in order to stake a claim to the two treasured belts, currently residing in the West Midlands.

The PROGRESS tag champs are currently The 0121 (Dan Maloney and Man Like Dereiss), a duo with a name derived from Birmingham’s dialling code. They will feel like, as far as their nearest contenders go, that they have their number.

Maloney and Dereiss won the belts from previous champions Sterling and Riley at Chapter 131 – but in a rather indirect way. The Aces went into a gauntlet match as champions, and saw off North West Strong and Lykos Gym before catching a fall from Sunshine Machine. In turn, The 0121 beat Mambo and Cooper, to become the champs for the first time.

Sunshine Machine have clearly got the taste for gold. While technically never champions, that short period in pole position saw them beaten by the fresher team, and was followed by a match at Chapter 132 in which the 0121 survived by the skin of their teeth.

One could understand Sunshine Machine being given another shot at the gold, but The Aces have their claim too. Yet to get a rematch after losing the belts following a six-month reign as champions, Sterling and Riley also hold a victory, at Chapter 130, over the Birmingham duo.

If recent tag matches in PROGRESS are anything to go by, this is set to be a show-stealer. Not only will two stellar teams face off, but the champs have publicly declared their intentions to be present during the show.

All three units are favourites of the PROGRESS audience. It is hard to dislike the awesome teamwork, charisma, and high-quality in-ring ability of all six men. The duelling chants prior to the Machine v 0121 match, which lasted almost as long as the match itself, displayed the esteem those teams are held in, and you can bet Smokin’ Aces’ popularity rivals that too.

The three teams also appear to have a healthy esteem for each other. Matches between them have been intense and highly competitive, yet respectful, but how long can that last? Two beautiful yin-and-yang title belts are desired above all among the sextet, and in this numbers game, six does not go into two.