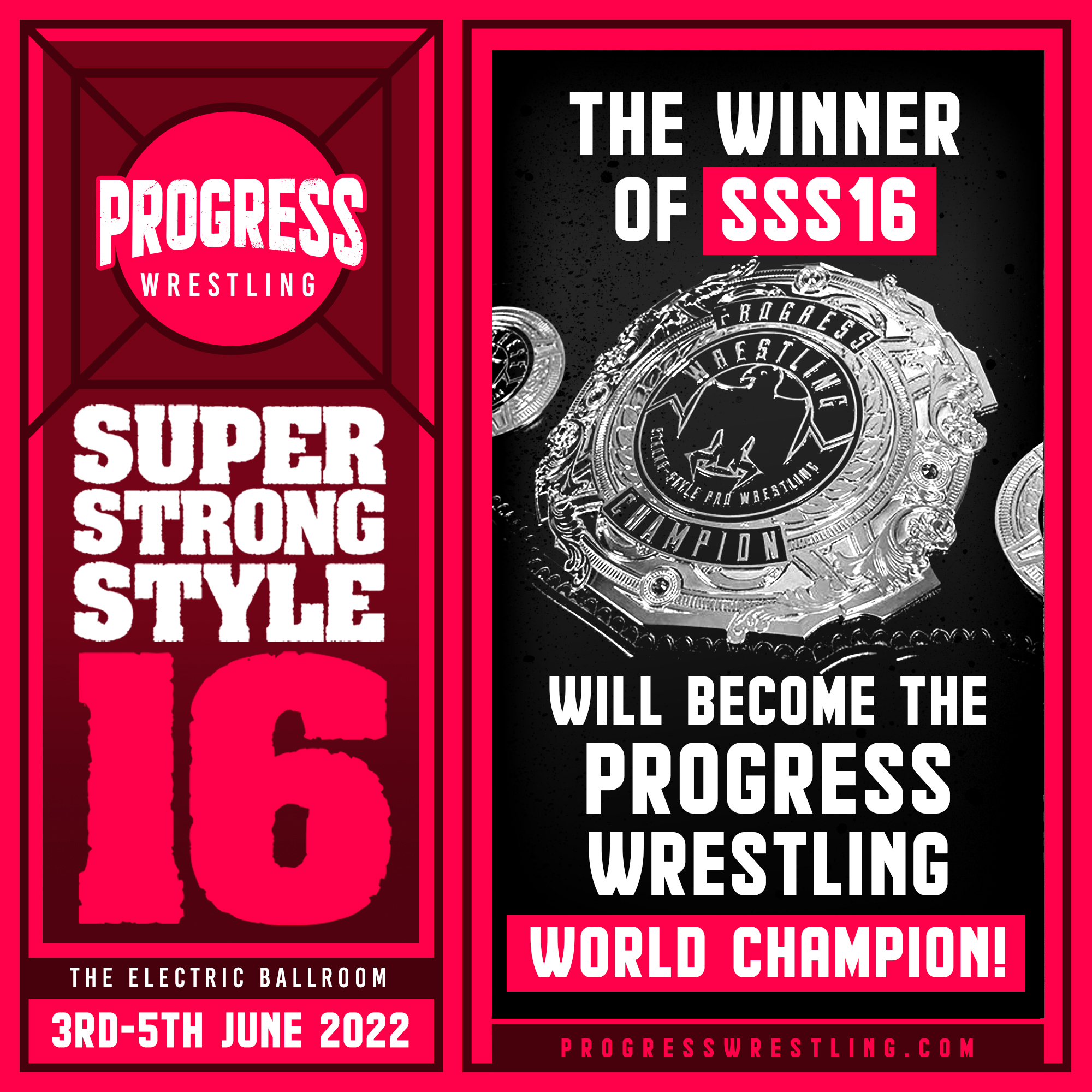 After the chaotic finale to this past Sunday’s Chapter 134, it has been confirmed that a new PROGRESS Wrestling World Champion will be crowned on Sunday, 5th Jun at the conclusion of the long awaited Super Strong Style 16 tournament.

Historically, the 16-man tournament has been used to award the victor a future title shot. This year, the winner will cut out the middle man, and claim the prestigious gold outright.

SSS16, which will begin on June 3rd and run over three days during the Jubilee Bank Holiday weekend, will be used to determine who will claim the title, which was made vacant following Chapter 134: No Mountain High Enough.

In a shocking turn of events, Jonathan Gresham went into the Electric Ballroom as the champ, but after his acolytes Lykos Gym attacked Gresham’s opponent, Gene Munny, before the opening bell, management made the decision to add a stipulation to the match: should Gresham be disqualified, he would lose the title.

Few could have expected what happened next. The Lykos wolves did get involved, but deliberately made sure the referee was watching as they once again attacked Munny. This meant not only did both Lykos members incur the wrath of their former ally, who you can bet will be seeking revenge in the near future, but also that PROGRESS management had to follow through on their threat. Gresham’s reign, in that moment, was over.

When you open the Twitter app it says “What’s happening?”

You know what, @twitter…we’re not sure. It’s absolute chaos here at the Ballroom.

In short…it looks as though Jonathan Gresham is NO LONGER champion. Management will have to address this title issue. #Chapter134 pic.twitter.com/9lwIzUi7xV

After several days of meetings and feverish discussion at PROGRESS HQ, the decision has been made that the wrestler that survives the gruelling tournament bracket, needing to win four matches in three days, will become the 16th man to hold the championship.

This is only the third time the PROGRESS World Title has been vacant. In 2016,  Pete Dunne won a seven-way elimination match to become the champion after the first time the title was declared vacant. He went on to hold the title for almost a year. Dunne was PROGRESS Champion at the time he became the WWE UK Champion, and is now a fixture on SmackDown each week.

In January 2020, after Eddie Dennis’s shoulder injury meant he had to relinquish the strap, Cara Noir won a four-way match to claim the belt at Chapter 101. His record-breaking reign would last nearly 800 days, only ended at the hands of Gresham in March this year.

Many names have already been announced for this year’s tournament, including Rickey Shane Page, Warren Banks, Gene Munny, Big Damo and Germany’s Maggot, but PROGRESS management fully expect the demand for the remaining places to be exceptionally high, given this announcement. Remaining contenders will be announced first here on PROGRESSWrestling.com.

The three-day wrestling extravaganza begins on Friday, 3rd June, which is a bank holiday in England, with all three shows at the Electric Ballroom in Camden, North London. The weekend will also see Spike Trivet and Cara Noir clash once again in an I Quit match with the loser forced to leave the company. The remainder of the card over the huge three-day event will be announced in the coming days. Tickets for individual days, and special ticket for all three days, are on sale now from our dedicated ticket store.