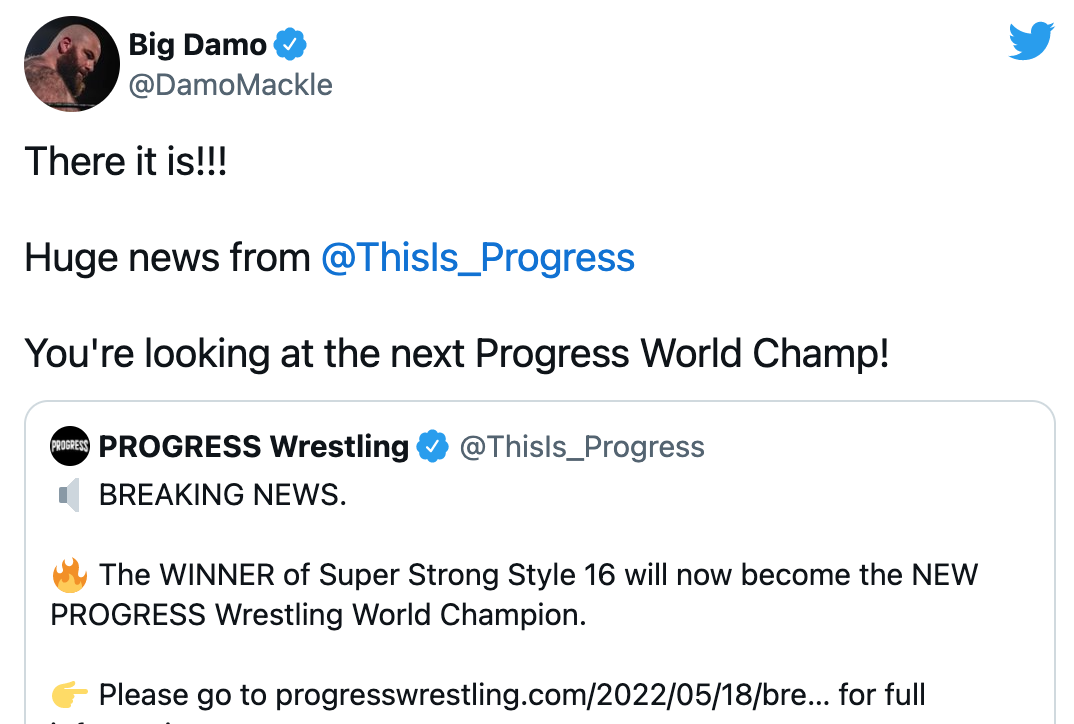 Over the last week tor so, the wrestling world has been reacting to the news that the winner of the upcoming Super Strong Style 16 tournament will be crowned the new PROGRESS Wrestling World Champion.

After the controversial events of Chapter 134 on 15th May, previous champ Jonathan Gresham was stripped of the belt, which was promptly declared vacant.

On the Jubilee Bank Holiday weekend of 3rd-5th June, at the Electric Ballroom in London, 16 elite wrestlers will compete in a gruelling tournament, with the winner immediately ascending to the top of the PROGRESS ranks.

Some of those wrestlers have been reacting to the news after it broke on Wednesday.

An exciting entry into the tournament is Mexican luchador and PROGRESS debutant Aramis. The masked high-flyer, who styles himself on the literary musketeer with the same name, cannot wait to get to North London.

He said: “There’s no better way to make my debut at PROGRESS than entering to the SSS16 and now the winner becomes the new World Champion, this got even more exciting! 🔥⚔⚜”

There's no better way to make my debut at Progress than entering to the SSS16 and now the winner becomes the new World Champion, this got even more exciting! 🔥⚔⚜ https://t.co/9ngwM4l6SS

We know that there is an entry available for one of the Close Personal Friends, or CPF, to claim. As yet, we do not know if Joe Lando, Danny Black, Callum Newman or Maverick Mayhew will be the man for job. Mayhew, though, spoke confidently on behalf of the group: “CPF are gonna be the new @ThisIs_Progress Wrestling World Champion🏆🎈”

Man Like Dereiss, half of the tag team champions The 0121, will not be in the tournament. He and partner Dan Maloney are set to be part of an extraordinary spectacle, the first-ever triple ladder match in PROGRESS history. However, Dereiss is clear on who he is backing for the tournament.

“It’s @manlikebanks time 👑” he said, speaking of his pal, Warren Banks. The Nigerian Kaiju also reacted with excitement – assuming, that is, that the meme of the grinning dog licking its lips means Banks is pumped for the event.

Speaking of dogs, also going with a pictorial reaction was That Damn Dirty Dog, Gene Munny. At Chapter 134, Munny finally got what he has been seeking for months: a spot in the SSS16 tournament. Now, with the extra incentive for the participants, Gene got a little creative. It turns out that his Photoshop skills do not really match the quality of those he shows in the ring, but his head on the broad shoulders of someone holding the belt told the tale he was trying to convey.

Another entrant to confidently react was Malik. The Hitta put in a fine showing when challenging Gresham in the Octopus’s first title defence at Everything Patterned. He obviously still has the taste for the title, quote tweeting our message and saying: “*Translation* The Hitta is the next @ThisIs_Progress Champion.”

Big Damo will be returning for more tournament action, having played a part in the Atlas weekender in April. The man from Northern Ireland would love to add ‘PROGRESS Champion’ to his storied CV. He said: There it is!!! Huge news from @ThisIs_Progress. You’re looking at the next Progress World Champ!”

You're looking at the next Progress World Champ! https://t.co/le6X7WQNpV

Robbie X will return to PROGRESS for the first time in eight years, much to the delight to swathes of fans who requested his entry. The Innovator of Excellence also reacted to the news with a warning to his competitors: “I’m a man on a mission to prove why I’m one of the best. Try get in my way.”

Im a man on a mission to prove why I’m one of the best. Try get in my way. https://t.co/ELgokEiuyw

Rickey Shane Page, the big Ohio native who made a big impact on PROGRESS fans, is returning for SSS16, and his message was somewhat more to the point. “I like belts,” he said.

Here are some other fans’ instant takes on the news.

@MatMagazineUK: “Super Strong Style just got even bigger stakes, damn. Lot of talent already announced too, should be a fun weekend down at @ThisIs_Progress”

@DiegoKike94, a PROGRESS fan in Mexico, said: Denle el campeonato a @chrisridgeway__ pero ya! #SSS16” Translated, this essentially means: ‘Give the championship to Chris Ridgeway now!’

@Elliottt93: “A new @ThisIs_Progress Champion will be crowned! Huge news and a massive opportunity for one of the participants in this match. #SSS16 just got even bigger!”

A new @ThisIs_Progress Champion will be crowned! Huge news and a massive opportunity for one of the participants in this match.#SSS16 just got even bigger! https://t.co/V1uMZQ6U3O

@Ryan_Gooner97: “As if there were more reasons to have to get to these shows 👀”

Tickets for Super Strong Style 16 2022 are on sale now from PROGRESSWrestling.com/tickets. Full weekend tickets as well as individual tickets for June 3rd, 4th and 5th all still have limited availability.