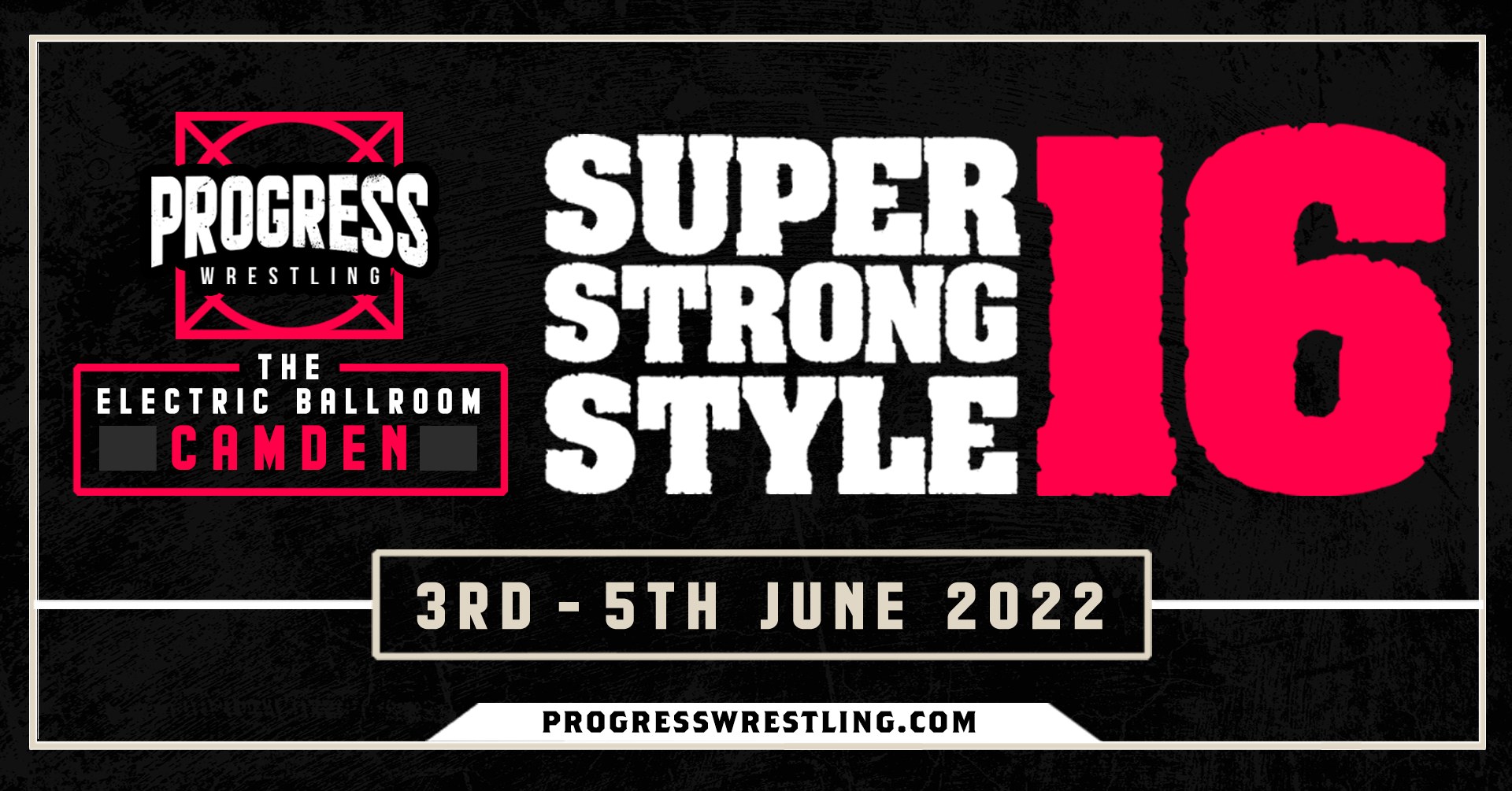 The line-up for Super Strong Style 16 is now complete, and the draw has been made to determine the bracket for the tournament, the winner of which will claim the vacant PROGRESS World Championship.

The 16-man knockout competition will take place on the three days of SSS16 weekend, at the Electric Ballroom in Camden, North London. Day one, which will see all eight first round matches take place, is on Bank Holiday Friday, 3rd June, with the quarter-finals taking place the following day. On Sunday, 5th June, we will see the semi-finals and final, to conclude proceedings.

Since the bracket was revealed, fans have been speculating on how matches will develop, and what paths their favourites may take to the final. Below, we analyse the first-round ties in detail. If you would like to predict your own bracket, and share your opinions, check out our tournament predictor game here.

No-one, absolutely no-one, campaigned harder to get into the Super Strong Style 16 tournament than Gene Munny. Creating his own set of challenges, he negotiated several hurdles to eventually claim a spot in the line-up – but now the hard work begins. For that Damn Dirty Dog to win the title, he must win four matches, and that path begins – and perhaps ends – with a match against Rickey Shane Page.

“A few months back I wrote a list of folk I wanna wrestle,” tweeted Munny, on seeing the draw. “RSP was at the top. I’m gonna try not to regret that, yeh?”

RSP was at the top

Either way, it is going to hurt. RSP’s USP is that he combines a hard-hitting style with high-flying moves that belie his girthy build. He also has recent tournament experience, reaching the semi-finals of April’s Atlas tournament.

“I love PROGRESS, I love the UK, and I hope to get to come back,” he said, in the aftermath of his first PROGRESS visit. He now has his wish. Munny has his, too – though he may live to regret it.

Until a near-miss when challenging for Jonathan Gresham’s PROGRESS World Title, Malik was on an impressive six-match winning streak in one-on-one encounters in PROGRESS. With Kosta Konstantino a constant presence in his corner, he will not be short of confidence going into this match against the Prince of Pace, who will look to use his natural speed and agility to his advantage.

The Hitta’s belief will be buoyed by a victory at Chapter 130, admittedly in an eight-man tag, in which Malik’s team defeated Close Personal Friends, which included his SSS16 opponent Callum Newman.

Malik and Newman go further back than some would realise. Once good friends, they were even on opposite sides on a non-broadcast six-man tag match in May 2019, at Chapter 87, in which Malik’s team were victorious.

Malik took to Twitter to address the match, after seeing the draw. “Me and @PrinceofpaceCN go way back,” he said. “Thought of him like a little brother at one time. Then the little dickhead forgot where he come from and decided he’d rather be just another one of the flippy boys rather than a star.”

Ultimately, history means nothing. These two would seem to be sure-fire bets at becoming PROGRESS Wrestling’s future. In the present, which of these will advance, and can they go all the way?

Did somebody say ‘professional wrestling’? These two men are about as good as it gets in this country when it comes to technical, pure action in the ring.

The well-travelled Ridgeway is recently back from a tour of Japan, from which he returned unbeaten. He has experience in SSS16 before, is a former Natural Progression finalist and has racked up over 50 matches in the company – but is yet to win gold, despite coming agonisingly close on more than one occasion.

Allmark fits similar parameters. With 22 years of experience, for promotions all over the world, he is still in his prime. He too is without a PROGRESS title – the only losses he has suffered in the company have been title matches.

Expect a tactical affair. However, will each man be aware of the marathon nature of the tournament? If this was a normal, one-off encounter, one would expect this to go a long time, as both men exercise patience to get the win. This time, energy conservation is key, too. This is going to be fascinating.

These two are anything but a pair of Charlies. There is once again some serious talent in this match, but unlike Allmark/Ridgeway, these two could not be more different.

Perhaps the single thing they have most in common is a distain for the crowd. You do not generate a nickname like ‘The Spectacular Twat’, as Crowley has done, without just cause.

That said, one suspects that Crowley would love to be loved. Dempsey seemingly could not care any less. Initially drawing admiration from fans in NXT UK, Dempsey’s nasty streak since aligning with the Die Familie faction has turned plenty off of his character, though few would deny his limitless potential. He is on an eight-match winning streak, often grappling opponents into submission.

Crowley, though, is master of misdirection. He is yet to lose a singles match in PROGRESS, and will surely seek to get inside the head of the stoic Dempsey, and ruffle his opponent’s feathers.  Can Crowley put Dempsey off his stride? Game on.

It is not just Tom Cruise who is once again feeling the need for speed. The pairing of these two in the first round not only creates excitement about the spectacle, but unlocks an incredible second round tie, whoever advances.

Let’s not get ahead of ourselves, because this match looks a mouth-watering prospect. Aramis is maybe the biggest unknown quantity in this tournament, for many reasons. For one, he carries that Lucha mystique, with masked persona and innovative style so common of Mexican athletes. He also has no British experience, so could potentially find the adjustment very difficult.

He is, though, a mesmerising performer. Selected by the legendary Konnan as the next big thing in Mexico, and named after a character from The Three Musketeers, he is willing to go to any lengths for victory. Will that prove sustainable in this environment?

Perhaps not against a man like Robbie X. The Innovator of Excellence, who once dwelt under a mask of his own, is back, eight years after his only PROGRESS appearance. He can fly high with the best of them, but has excellent fundamentals and hits as hard as any.

His announcement of being in the tournament was greeted rapturously by PROGRESS fans, and their support may aid Robbie, with Aramis being perhaps out of his comfort zone.

The winner of the aforementioned contest will meet one of these two experienced, exciting performers, guaranteeing another stunning match for day two.

Johnny PROGRESS, known to many as John Morrison, and Jack Evans go way back. They are similar ages, with comparable experience, and have even held six-man tag team gold together. Both will be making their PROGRESS debut.

Evans, in terms of breadth of experience, is probably ahead, featuring for virtually every major promotion around the world.  Not, though, WWE, where Morrison has won tag titles, been ECW champion and won the Intercontinental title three times.

Their stature and prestige in the wrestling industry is indisputable and is a clear indicator that the pull of this tournament being for the vacant PROGRESS World Championship is huge.

However, the fate of the draw means only one will reach the second phase of the competition, where they will meet either of the speed-merchants, Aramis or Robbie X. What a prospect.

“It’s the talk of locker rooms across the world, and everybody is hungry – but no-one is hungrier than Big Damo.”

Those are the words of the big man from Belfast, promising bangers and blitzes for everyone in SSS16. Since finding out his first-round opponent, Damo has turned his attention to Warren Banks, tweeting: “Bring it on. Local favourite gets battered.”

The fighting words show that Damo is bang up for the tournament, but the rhetoric will likely not sweat the Nigerian Kaiju. “The bigger they are, the harder you have to knee them in the chin. See you in the Ballroom, pal,” he responded.

Both men are good with words, but better with actions. This will undoubtedly be a hard-hitting affair, and once again there has to be a consideration about the balance of getting through your match, but having enough in the tank for the remainder of the tournament.

Few hit harder than Damo, but then not many have the reserves and mentality Banks possesses. This is impossible to call.

What is not difficult to call is the Electric Ballroom’s allegiance in our remaining match.

Maggot was a hit on his PROGRESS debut at Chapter 134, as he prevailed against extreme odds to win the wXw four-way to qualify for the tournament. The immediate affection shown by the Camden faithful to the German is in stark contrast to the general level of disdain shown towards Kid Lykos and his ubiquitous sidekick, Kid Lykos II.

If Maggot can keep an eye on both wolves, then he has a strong chance here. He showed amazing resilience and guile in his qualifying match, and is a rising star of European wrestling.

Lykos Gym, though, seem to have insatiable appetite for the limelight, and for mischief. They made themselves the story of the last Chapter, turning on ally Jonathan Gresham and costing him the PROGRESS World Championship, hence the reason for the tournament winner becoming the new champ.

Just imagine Lykos Gym’s delight if their plan pays off in the most spectacular way, and Kid Lykos wins the whole thing. And just imagine how Gresham would feel about that.