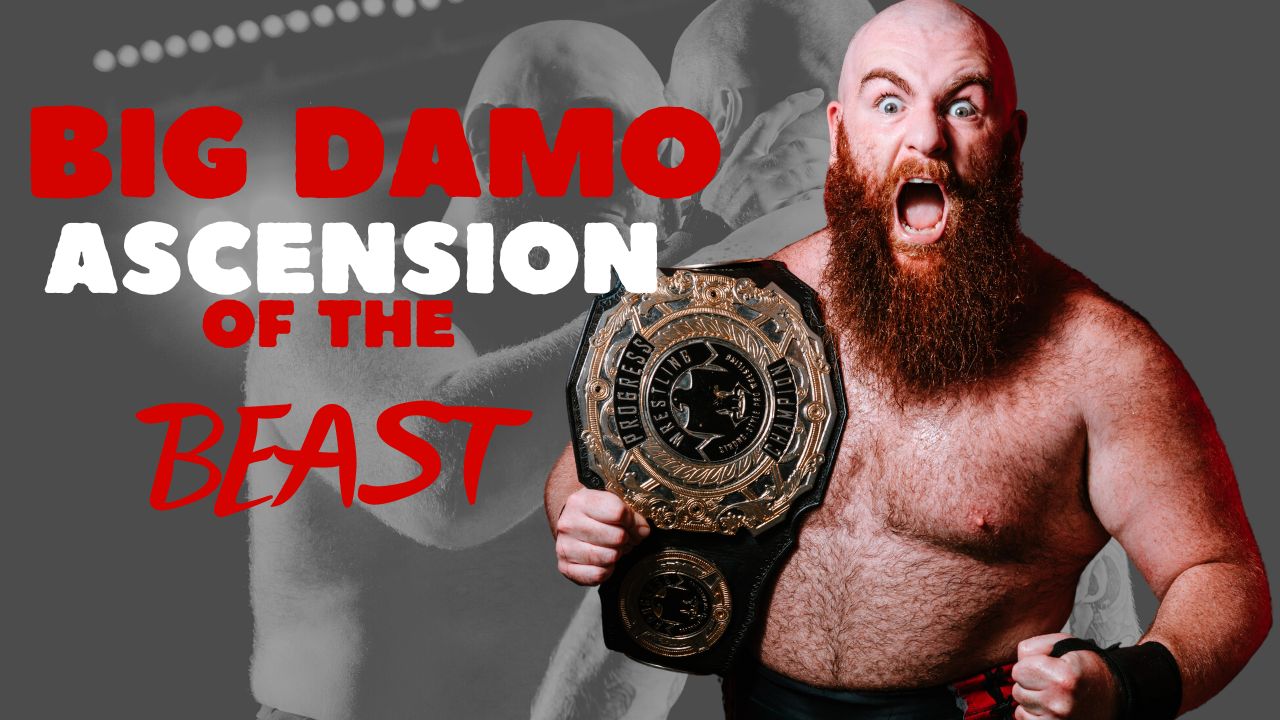 Big Damo – Ascension of the Beast 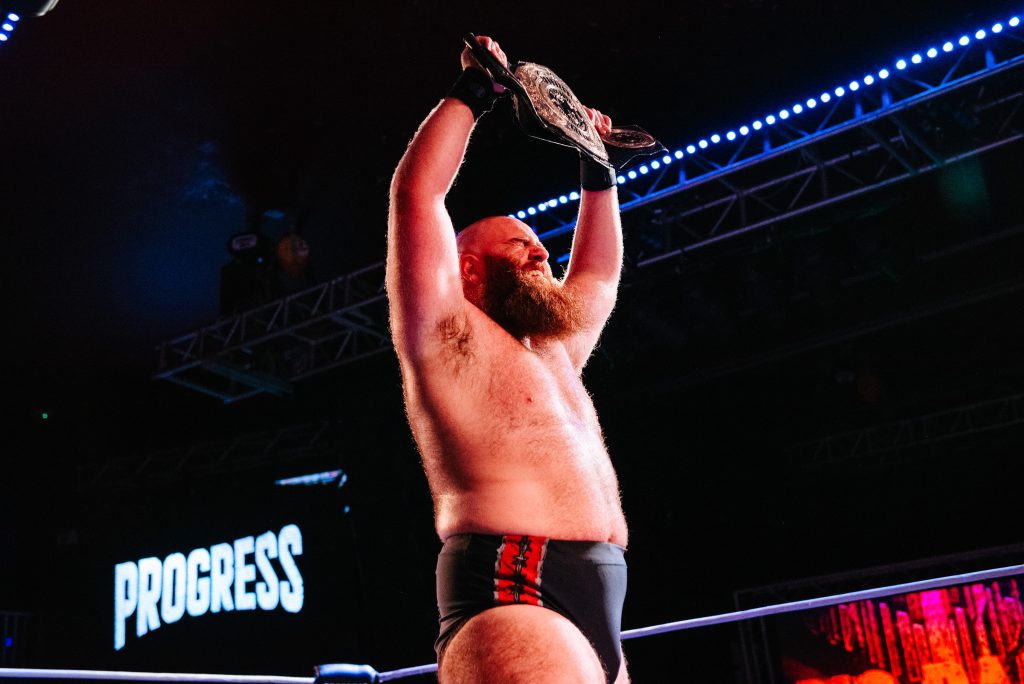 The Beast Of Belfast has been picking up momentum quickly recently culminating on the first leg of the Deadly Viper Tour in Sheffield when big Damo shocked the Progress Champion Chris Ridgeway and took the title.

After the ensuing Guinness-bath in celebration, Damo then headed to Newcastle on the Viper Tour to take on the 0121 (Dan Moloney, Leon Slater & Man Like DeReiss) in six man tag action with partners NOAH GHC JR Heavyweight Champion HAYATA and Progress Atlas Champion Luke Jacobs. Once more taking the win, led to Big Damo challenging anyone of The 0121 to a title shot, with Damo giving The 0121 the choice of who faces him.

We caught up with the current Progress Champion just before he was set to go and visit his family in the US and his first International title defence at Black Label Pro’s “Total Eclipse Of The Hart” against Kevin Ku before returning to the Electric Ballroom on Sunday to hopefully make his first UK title defence against Dan Moloney who has taken the challenge at Chapter 139: Warriors Come Out To Play. 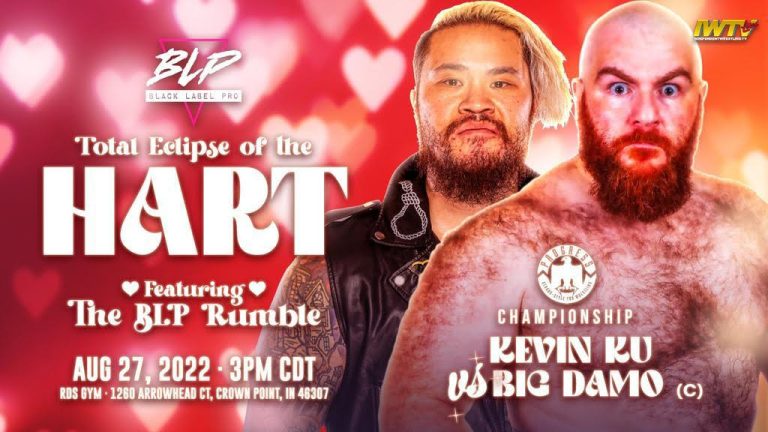 So coming off the back of your monumental achievement in beating Ridgeway for the title have you had a chance to reflect on it yet?

The thing about this business, is that you really don’t have time to sit down and think about it, (laughs) you’re always away to the next. I’m already like the ultimate travelling Progress Champion, I only won the title last week and I’ve already been in multiple countries!

Every time I open that case and see that title, I think this is not at all what I expected, because when I first came to Progress I really struggled to get out of first gear at all. It was 6/7 years ago and I was on one of the most stacked rosters on the planet. This talent it was like a supergroup if you will. They all went onto wonderful things and I couldn’t seem to get off the ground level at Progress at all.

It’s funny though how careers turned out, I travelled the world (As Killian Dain in the WWE), came back, spoke to the boys at Progress and I realised I needed to do something to turn this around. Finally I got the ‘W’ against Dean Allmark (Chapter 135: Super Strong Style 16 -Day 2), which was my first ever singles win in Progress, against a modern British legend and I won that. Maybe that gave me what I needed because I then I came up against Chris Ridgeway.

I heard what this fella had been saying, that Chris Ridgeway was going to be Progress Champion for the rest of his career almost. I saw how he systematically took everyone apart at Super Strong Style, but it was a bridge too far coming up against me. As good as Chris Ridgeway is, his technique is unbelievable and what he did to my leg is outrageous, but listen, there’s a reason why every other sport has weight divisions, in pro wrestling we don’t have that, so you have Chris Ridgeway facing a super-heavyweight in Big Damo and I took the title from him and now I travel the world as Progress World Champion.

So have you had a chance to celebrate with your wife yet? (WWE’s Nikki A.S.H.) or in true Leon Edwards style (The brand new UFC Welterweight Champion) did you ring your Mum first?

Ha! I think definitely I think I spoke to my wife, we haven’t actually seen each other and we are meeting up in New York after this. Thats the beauty of both of us being wrestlers on crazy schedules. But I brought the title back to my Mum and the first thing she said was “This is REALLY heavy!” And I was like, well what did you think it was going to be?

Now you’ve just mentioned you’re off to America for a couple of days to face Kevin Ku at BLP “Total Eclipse Of The Hart”, but then you are straight back in with your hopefully first UK title defence Sunday at Chapter 139: Warriors Come Out To Play against The 0121’s Dan Moloney. Have you prepared for that? What was your mindset in allowing The 0121 to choose who faces you for the title?

Look, I got that title shot by chance/happenstance more than anything and there’s huge amount of talent on the Progress roster that maybe haven’t had their shot or had their chance to be the champion. My first thought was The 0121 just killed it in Newcastle, they did everything they could, they threw the kitchen sink at us, but it was our experience that won it for us. Myself and HAYATA there’s 40 years of experience and in Luke Jacobs, one of the fastest rising wrestlers coming out of Britain, which is another example of a bridge too far.

But I’m not taking anything away from them, because watching The 0121 or trying to beat them down myself, they are simply incredible talent, be it DeReiss, Dan Moloney or the young man and oh my days, I’ve not seen anyone rival the talent that Slater has at the age of 17, maybe Nick Wayne, but if he keeps his head together, he could be a multi time world champion all across the world, he is something really special.

It’s the same with DeReiss, who is one of the most charismatic dudes and backs it up in the ring, then you have Dan Moloney who is as strong as he is crazy to be honest. This is the thing with Dan, he was the first one to step up, the first one to challenge Big Damo and I have all the respect in the world for Dan because I know there are a lot of guys who are ducking me, who want to wait and see who will step up first.

As I said with Chris Ridgeway, everyone thought he was going to hold the title for the longest time and then he came up against someone like me. So I’m returning the favour. If you want your shot, you’ve got your shot and this starts with Dan Moloney on Sunday.

You just mentioned you’d give anyone their shot, so that begs the question is there anyone on the Progress roster you want to run it back with? Scores to settle? Or just want to get in the ring with?

Sure there’s plenty of them, there’s Warren Banks and I know he’s suffered a terrible injury recently but when he’s ready I’ll give him his shot, he earned it. I think I owe one to Luke Jacobs who also beat myself and former tag partner Axel Fischer in the Atlas Tournament.

But listen there’s a squadron of boys with so much talent in Progress that I’d love to get in there with, the likes of the Sunshine Machine, I’d really like to kick the sh*t out of Lykos Gym, there’s so many right now and there’s even companies across the world that want me to come and defend the Progress title on their shows as well. Listen I more than happy to make this a world travelled title. Im happy to take it to America, Japan wherever else and I will defend it across the world because at the end of the day, it is a world title for a reason and I’m a world travelled wrestler and Im more than happy to take it to the next level. 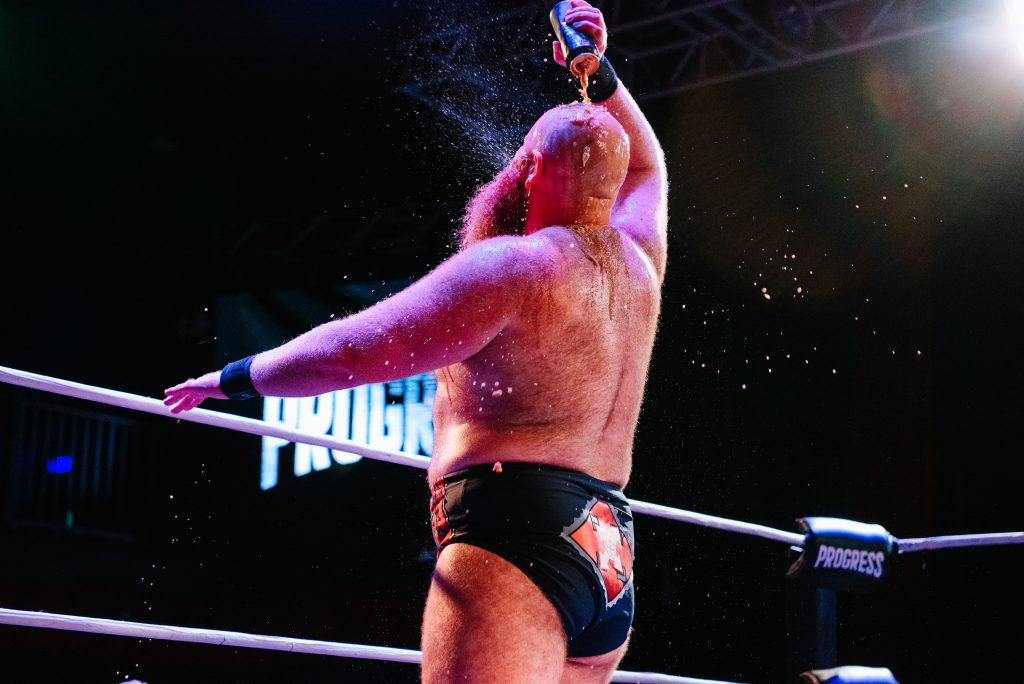 That for me would be a massive ambition of mine, just last night I wrestled a show there and I’m telling you the crowds there are more than ready for an incredible show from Progress. They get a little bit here and there from the local promotions. But they could get much more with Progress with me defending the title against one of the incredible wrestlers here, be it The Kings Of The North, Tucker or Adam Maxted, there’s so many lads that came out of this area that I’m more than happy to mix it up with.

As I said if anyone wants to step up in Belfast or Dublin or anywhere else, I’m more than happy to do it. I want to be the longest reigning champion in Progress, which means I have to beat everyone, equal and surpass the records of the likes of Cara Noir, who was an incredible champion. But listen I was the first person to take the title outside of London, Im the first Irish champion, so wherever you want me to defend it, I’m there, waiting and ready.

You have a massive fanbase that have supported you especially in Progress, do you have anything you want to say to them, rather than spraying them all with Guinness?

Haha, fortunately that went down OK, but the one thing I want to say to the Progress fans is don’t change. One of the coolest things about Progress shows is that it is like being at a football match with all the noise and chanting.

There’s something very beautiful about that, it’s come into the common lexicon of wrestling everywhere now and the Progress fans were the pre-cursors of that across the world. So if you like something please tell us and if you don’t then definitely please tell us!

There’s nothing better than being on front of that crowd and hearing what they are saying. Like in Sheffield, they didn’t stop and I haven’t been in Sheffield in years! The same in Newcastle, it was incredible. Newcastle is a place I’ve always enjoyed wrestling in so it was a privilege to be there.

So Progress fans please don’t stop what you are doing. If it wasn’t for you guys, so many of us wouldn’t have got to where we got to and for the next generation that’s coming after me they need all the support they can get, because listen this is a very tough industry that only a very small minority make it, out of the local towns, so I promise you if you give the next generations the same support then this industry will thrive for years to come.

When I got into the ring with The 0121 in Newcastle, Dan Moloney threw me around like a wet tracksuit and that doesn’t happen too often to Big Damo and the truth is and this will be the hardest part for Dan Moloney to deal with, Big Damo gets back up again. You do thrown me down, you do manage to get me off my feet and that’s fantastic, but I got up and I took that victory in Newcastle.

Listen I’m going to be bringing everything I can, I may have travelled to the other side of the world and back by Sunday, but I’ll be ready Dan. I’ll watch your matches on the plane, I’ll do whatever I have to do to be ready for all of your little tricks and I’m going to show you plenty of mine, I’ve had 18 years experience in wrestling and I can tell you, I was designed to be a Progress Wrestling Champion and I can’t wait to show what Progress Wrestling WORLD Champion Big Damo is all about.

Limited tickets are available for Chapter 139: Warriors Come Out To Play this Sunday (28th August) and you can get yours right HERE

Big Damo – Ascension of the Beast