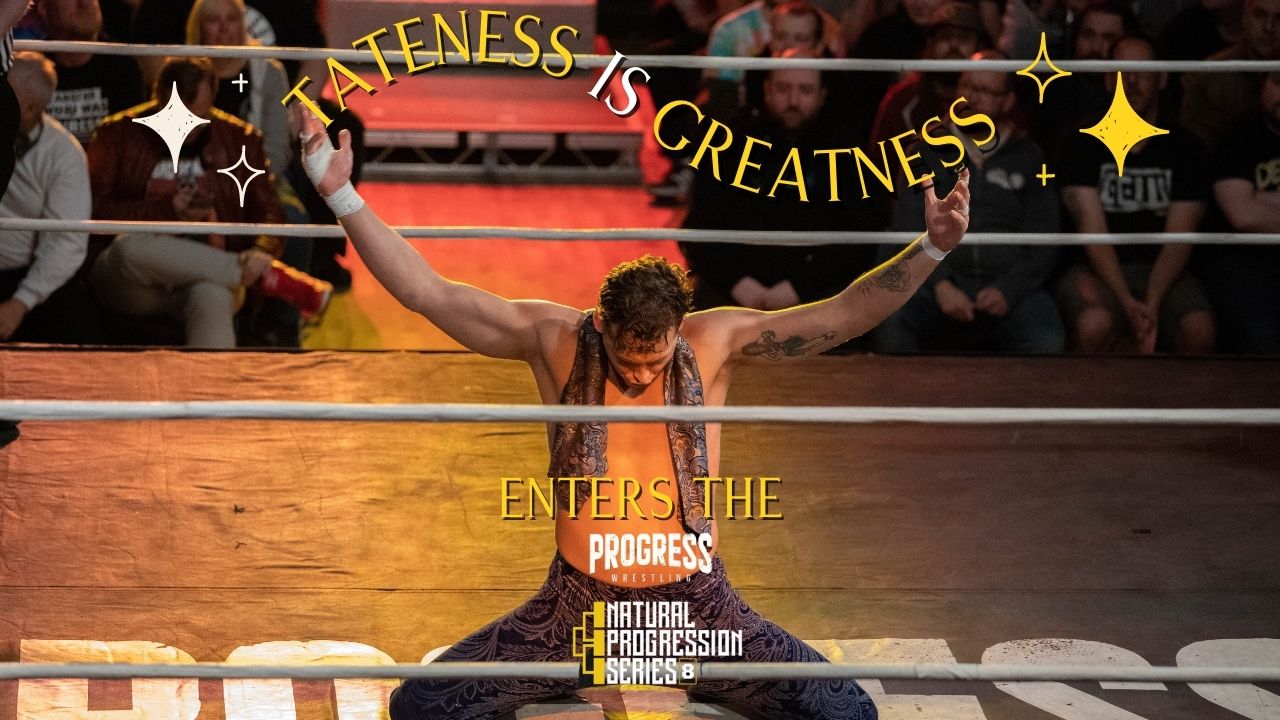 It’s an autumn afternoon and we are waiting in one of Soho’s more upmarket bistros, as our guest of the moment arrives. Tate Mayfairs is a man who made an instant impact in PROGRESS at the beginning of 2022 and has recorded wins over both Gene Munny and International star Effy, and had an astonishing match against Olympic Boxing medallist Anthony Ogogo. So, as his gold Rolex clinked against the saucer of his Frappuccino, we wanted to know how he made that happen?

What do you mean, how did I make that happen?  I’ve been telling you all I’m the “Greatest Professional Wrestler To Ever Walk Planet Earth”™.  I know the majority haven’t cottoned onto that one yet and are doubting me, but I’ve proven myself right every time I’ve walked through that curtain. As I’ve told people, I have friends in high places and I’m going to the very top of this organisation.  So, I have proof that what I say happens and going to back to your original point, when you type into Google – the place that has all the facts – the place that can predict the future, the ‘Greatest Professional Wrestler To Ever Walk Planet Earth”™ and it comes up with me, you can see what I say is true. You can take it to the bank and make yourself a wealthy person, just like I am a wealthy person!

Going into your battle with Sam Bailey at the NPS this weekend, what are you going to change about your game plan?

Yeah, Sam Bailey, he’s very different right, and the fans love him for it, except they’re not what I call wrestling fans – they are two very different things.  With Sam, what I notice is his strength, the way he carries himself,  the way he acts. And maybe that’s what he wants, but I’m not going to let him distract me and going bell to bell I’m going to show once again why I’m the best to ever do it.

This is fighting. I come from a long lineage of fighters – my father, my grandfather, my great grandfather were all martial artists, muscle for hire, prize-fighters.  Very dangerous people as you can see.  I’ve been in this game since I was 14 years old, I’m a flashy man, a violent man, a fighter and I make no bones about it. I will beat Bailey and then I will go on and win the whole of the NPS.

Can you give us some insight into the NPS?

Well for those who don’t know, the NPS (Natural Progression Series) is one of the richest pieces of PROGRESS Wrestling history.  People who have gone before and won, have become some of the biggest names in wrestling and for whoever wins it they get a title shot of their choosing.  I said at the top of this I’m the ‘Greatest Professional Wrestler To Ever Walk Planet Earth”™, and I AM going to win this and I’m going to beat every jabroni along the way. I will be the NPS 2022 winner and I will end the year as your PROGRESS world wrestling champion.  There can be no doubt.

Strong words, especially as the current title holder is Lord Spike Trivet – so how are you going to go about achieving that?

Well, I’m sure that Spike will not be too chuffed when he hears about you throwing down that particular gauntlet.

The thing is, that title has moved around a lot of hands recently. It’s a very competitive scene.  We are witnessing the boom 2.0 and boom season is starting again and this is the beginning of the hottest ever time in British professional wrestling. That title changing hands so often is proof of it, the competition is fierce and it’s hard to hold that top spot, well, at least until I get there, and I am leading that charge in making the British wrestling scene the most important in the whole world.

The NPS isn’t as straightforward as you’re making it out to be though? There is some other spectacular talent taking part, such as Leon Slater, Ricky Knight Jr (Who has already qualified for the semi final), Sam Bailey, Liam Slater, Joe Lando and Nico Angelo.  Is there anyone in particular you want to face and take that scalp along the way?

I don’t care who it is.  I saw Liam Slater in Newcastle on my way to the ring to tell the world that I am already qualified for the NPS. I could knock him out… I saw Leon Slater (No relation) who’s ablaze right now, I’ll knock him out.  Nico Angelo, Joe Lando, I’ll knock them out… RKJ… it doesn’t matter,  I told you what I’m going to do.  This right hand (Holds his fist up) is strong and true and it’s proven to be the hand of Greatness. You cannot survive it.  You cannot surpass what this hand does.

What is your ultimate achievement going to be?

That first show of PROGRESS’S comeback in January, I wasn’t supposed to be on it. But leading up to it, everyone who asked me, I told them I was on it,  This is a true story, I just told anyone who asked that I was going to be wrestling on it.  But I wasn’t booked. Now the ‘Axe Man’ Axel Tischer was meant to face Dean Allmark and just hours before the show he tested positive for COVID, which I had no part in, that’s obviously ridiculous, that’s just how life in the modern world has been. It was a last minute call for me to take his place on that show.

That set the precedent for the year and it went on from that, from strength to strength to strength.  It is undoubtable that even my biggest haters cannot deny I am now one of the biggest names in British Wrestling right now.  That first show was the catalyst and further proof that what I say, is in my heart, in my spirit and my words come true.  I am telling you right now that Tateness Is Greatness and I am going to win the NPS and I will go on to win the world title and change not just British wrestling but the whole world over in my name.

You just mentioned that Tateness is Greatness and there are some people who are starting to believe in it and jumping on the Tateness hype train early?

Good for you, you are like an early adopter, like an early adopter to Apple stocks, an early adopter to bitcoin , well done you, you’re smarter than you look and there are a lot of ugly dumb looking people out there especially in the audience.  But the people who have cottoned on and are saying it and there are very few of you and probably not liked much by the people around them, but, they are smart and in this world it’s not about getting the love and adulation of everyone instantly, but great things take time. Pressure creates diamonds and you are looking at the only diamond in this industry right now. So well done to them they’re not as dumb as they look they have cottoned onto what everyone will soon realise.  Tateness IS greatness.

Here’s one for the big bald A$$hole, try and learn this one very simple thing, the ‘Greatest Professional Wrestler To Ever Walk Planet Earth”™. Understand that and get that through your thick bald skull, get it right because before the end of the year you will announce me as not only that, but the PROGRESS Wrestling World Heavyweight Champion.

And we finished our coffee and he sauntered out… and left me the bill.

Tickets for PROGRESS this Sunday can be purchased HERE