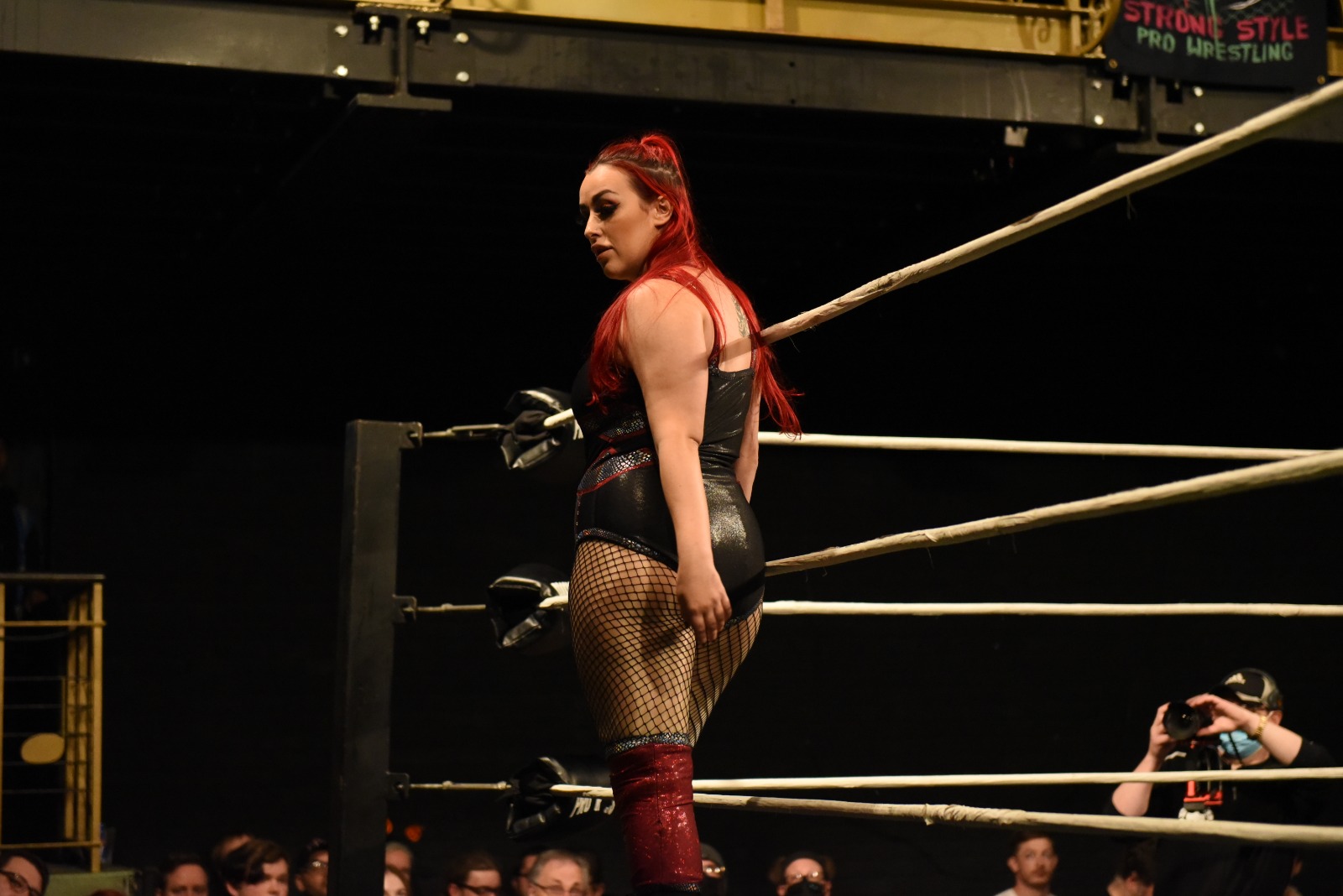 Alexxis Falcon had a bitter sweet Halloween after Nina Samuels snuck a win against the Iron Queen at Chapter 145: Wrestling Witch Face.  However, she managed to get a little payback, when Nina walked herself right into a scene out of Carrie and befell the same fate, in iconic fashion.  A prank that Alexxis Falcon laid claim to.

We spoke to Alexxis about the match and in particular, Nina cheating her out of a win. “I know” Alexxis replied.  She then went on to provide us with her thoughts about everything Nina Samuels.

“It’s real typical that after a wrestling match that when someone cheats to win they need to do what Nina did. But I feel more embarrassed for her, because, she’s Nina F*ucking Samuels. She’s been doing this longer than I have, athletically she’s in better shape… If you put the two of us next to each other and asked someone who you’d put your money on to win a fight, 9 times out of 10 you’re picking Nina.”

Alexxis continued “She had to cheat to win that match. I find that funny, I’m going away from this match happy. Because I got the last laugh, I know I’m going to get in trouble (for the Halloween Blood Bath on Nina) but I mean they can take that out of my wages I don’t care. But it’s Halloween and it’s my favourite time of year and right now it’s just embarrassing to be Nina isn’t it?

Alexxis, now more emboldened by standing up to Nina and taking her role as defender of the PROGRESS women’s locker room very seriously.  She’s not about to let Nina or anyone else for that matter interfere with that.

“I’m not going away from this embarrassed over my performance. That’s twice now that she’s come back to PROGRESS and  Nina’s left embarrassed at my hands. I think that is so funny, I mean I suppose I should really be GRRR! I HATE NINA! But she’s having to cheat to win. I don’t have to cheat to get a win. But there is unfinished business, because she’s the one doing all the cheating.”

“However, after what’s just happened, she’ll be the one cowering, running away because that’s what she does. I’ll be the one however who walks away with my head held very high, because someone as talented and as much of a superstar as Nina Samuels had to cheat to beat Alexxis Falcon.”

“I don’t take well to people who think they can just come back as if nothing’s changed and come back as they left it. The women have been working hard, so if she thinks she can just come back cause a ruckus, get her way, simply step over all of us to a title shot, then it’s me she’s going to have to go through. Management might think it’s the Nina Samuels Show, but I certainly don’t. If anything, Nina if you’re reading this, when all is said and done. People will be saying it’s not the Nina Samuels Show, but the Alexxis Falcon show!”

Alexxis Falcon will next be appearing at Chapter 146: They Think It’s All Over…  Tickets are now available  HERE